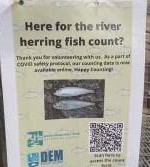 Every spring, the WRWC counts the river herring returning to the Woonasquatucket River to spawn. We do this to measure how well our fish passage projects are doing. After over a century of the river being blocked by dams and polluted by industry, now fish return from the Mid-Atlantic Ocean to spawn (make babies) in the freshwater part of the Woonasquatucket where they were first hatched.

Twice a day, from March through May, we count the herring coming through the Rising Sun Mills fish ladders in Olneyville to see if the herring population is growing in the Woonasquatucket River.  And it is! We’ve counted fish since 2010. During some years, over 39,000 herring return to their historic spawning grounds. The returning fish bring life and vitality back to the Woonasquatucket River and prove our restoration efforts work.

Herring are anadromous. That means they live most of their adult lives in salt water at sea, and they return to fresh water to spawn. For generations, the fish were forced to stop at Rising Sun Mills dam, and some spawned in the river near Donigian Park on Valley Street. In 2007, the WRWC built our first fish ladder at the dam behind Rising Sun Mills, allowing the fish to swim further upstream. Since then, the WRWC has removed two more dams, built a second fish ladder and a nature-like fishway. Although we only count at the Rising Sun Mills Fish Ladder, we know the fish make it all the way to the Manton Dam Nature-like Fishway. We visit it annually and see river herring both in the fishway and in Manton Pond. Now, the fish can find safe places to build nests and lay eggs all the way up to the Lyman Mill Dam in Johnston.

More than 40 volunteers make our fish count happen every year. They sign up for simple 10-minute counts. The volunteers learn to observe and record number of fish passing, the water temperature and the depth of water passing through the fishway. They count any time that suites them, document the information and send the to RI’s state fishery biologist who calculates the number of fish travelling upstream. When the fish community is booming, both the environment and economy benefit.

We will conduct the fish count with COVID guidelines in mind, using social distancing when needed. Please wear a mask at all times.

Join us for a count this year! Contact Zane.