Today’s WRWC has deep roots in Rhode Island. We began in the early 1990’s as part of an initiative to improve low-status communities in Providence by transforming the forgotten Woonasquatucket River. Since then, our scope has greatly expanded throughout the watershed, with our core still centered on the Woonasquatucket River Greenway.

In the Algonquin language, Woonasquatucket means, “where the salt water ends.” The local Narragansett tribe that named it valued and maintained the river where it ﬂows through Waterplace Park. Later harnessed for industry, the Woonasquatucket was neglected and trashed upstream, creating risks to health and safety.

Fred Lippitt and Jane Sherman secured over $12 million in capital funding to target the restoration of 52 acres of abandoned lands along the river. Mr. Lippitt enthusiastically raised funds for the WRWC’s continuing improvements and established $2.7 million endowment fund to ensure the sustainability of the Greenway.

Another environmental leader, Senator John Chafee, collaborated with Jane and the WRWC to acquire $3.1 million in transportation funds to build the bicycle path, and worked with President Clinton to designate the Woonasquatucket as an American Heritage River, one of only 14 in the country. In addition, Senator Jack Reed obtained a $1 million HUD grant to further the goals of the WRWC.

To date, 75 acres of land along the river have been restored. Parks that have long been abandoned are now renewed and used by residents. Gardens now exist where trash once lay. Wetlands have been restored where rusted cars were once discarded. Neighborhoods with beautiful, affordable housing surround some of our parks and Greenway.

The concept of a greenway along the Woonasquatucket River began in 1993, when Fred Lippitt, Chair of The Providence Plan, looked for an opportunity to spark the revitalization of Olneyville. Olneyville, the poorest, most underserved neighborhood in Providence, seemingly had few assets to build on, with the exception of the Woonasquatucket River – highly appreciated in Waterplace Park, but neglected and trashed in the upstream neighborhoods. In 1993, most people living along the Woonasquatucket did not even know the name, let alone the history of the river that flowed through their neighborhoods. At the time, the abandoned buildings, heaps of illegally dumped trash, and closed parks along the river were nothing more than eyesores and risks to public health and safety.

Fred discussed the potential for the Greenway with elected officials and city, state and federal agency heads, and convinced them and many others that this was an important and viable project. He loved to tell stories about his frequent walks along the river, chance encounters with children catching crabs in the river, and the policeman waiting at his car, skeptical that anyone with the number 24 license plate would have willingly parked at the Riverside Mills Brownfield site. He enjoyed surprising his tour guests, showing off the unexpected pristine river environment that could be found near the burned out industrial sites in Olneyville and Hartford. Fred created the vision for the Greenway – and throughout the long process remained positive about its potential and adamant that this would be developed with the same care and standards that the city placed in Waterplace Park.

Fred recruited volunteer staff, and a proposal was developed to restore the river and abandoned public and private lands as a catalyst for change in Olneyville. They effectively pursued a major grant from the Lila-Wallace Reader’s Digest Fund’s Urban Parks Initiative to plan and implement the Woonasquatucket River Greenway Project. Citizen’s Bank, the Merck Family Fund, and EPA New England offered additional support for the initiative. Under Fred’s leadership, the Greenway staff, working with city, state and federal agencies, leveraged over $12 million in capital funding for the Greenway, targeting the restoration of 67 acres of abandoned public and private lands along the river.

Fred played a critically important role in the development of the Greenway Project, supported and encouraged the development of the regional Woonasquatucket River Watershed Council as the new umbrella organization for the Greenway Project, and most recently spoke of the need to complete the fund raising necessary for capital improvements and an endowment fund to ensure the sustainability of the Greenway. Fred secured key city bond funds in 1996 and 2000 totaling over $2.7 million, meeting with the Mayor and every member of the City Council. His dedication to the Woonasquatucket prompted Senator John Chafee to secure $3.1 million in transportation funds for the bicycle path, and to nominate and speak directly with the President to ensure the designation of the Woonasquatucket as an American Heritage River. Senator Jack Reed worked equally hard to secure designation of the Greenway Project as a Brownfield Showcase Community, bringing in all the funding essential for environmental assessments and remedial design, and a $1 million HUD grant for the Riverside Mills cleanup.

Fifty-two acres of land along the river are already restored. Parks that were abandoned for years are now open and actively used by residents. Fifteen acres of contaminated industrial sites that were neglected for decades are being redeveloped for recreational and educational uses. Butterfly gardens now exist where piles of trash once lay. Wetlands have been restored in areas where rusted out cars were once discarded. Abandoned vacant lots adjacent to the Riverside Mills park sites will be redeveloped for affordable housing and home ownership opportunities for residents of Olneyville.

Fred’s vision of a Greenway that provides recreational opportunity, restores the river environment, stimulates economic reinvestment and promotes neighborhood stabilization in Olneyville is well on its way to being realized.

The River Hero title honors a few special people around the world each year for the differences they make. Jane Sherman became a 2014 River Hero because her vision and hard work made Olneyville in Providence a better place to live. She did this by bringing new life to the Woonasquatucket River and opening park land and a bike path around it.

Mrs. Sherman’s tireless work resulted in the Woonasquatucket’s designation as an American Heritage River and Olneyville as a Brownfield Showcase Community.

Mrs. Sherman formed partnerships between the WRWC, the Providence Police, Olneyville Housing and dozens of others. Their work led to an 80% reduction in crime in the area surrounding Riverside Park in Olneyville.

Senator Jack Reed has this to say about Jane Sherman. “Jane is a force of nature and incredibly deserving of this award. I remember touring Olneyville with her in the mid 1990’s and being impressed by Jane’s passion and advocacy for cleaning up the river, creating vibrant parks and green spaces where people could walk, bike, view wildlife and even enjoy boating and fishing. Jane’s remarkable commitment has led to a real transformation, not just of the Woonasquatucket River, but she’s helped improve the quality of life and opportunities for those in the surrounding community.

“Thanks to Jane’s leadership and the partnerships she formed, where the rubble of Riverside Mills once was now stands a vibrant twelve-acre park, complete with playgrounds, a community garden, a fish ladder, a bike shop and Providence’s only off-road bike path, a vital transportation connection for the West Side of Providence to downtown. Along the river, homes have risen and this Brownfield showcase community is a national model for building partnerships to transform neighborhoods. I salute Jane and everyone at the Woonasquatucket River Watershed Council for their outstanding work,” added Reed.

On July 30, 1998 President Clinton designated the Woonasquatucket River as one of only 14 American Heritage Rivers in the nation (partnered with the Blackstone River).

The Woonasquatucket River was chosen in part because of the significant role it played in the Industrial Revolution. The Woonasquatucket was one of the first rivers to be dammed by mill-owners to insure a steady supply of water year-round for their mills. Read more about this important designation here. 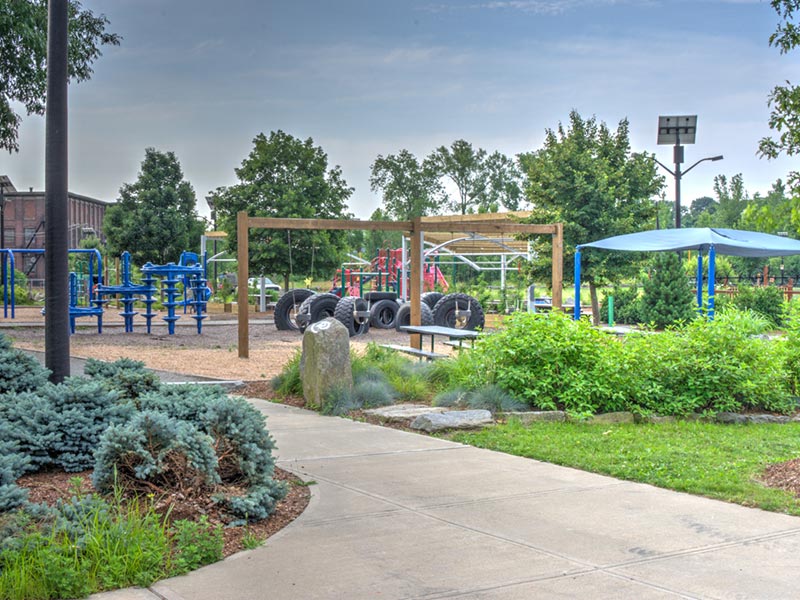 In March 1998, the Woonasquatucket Greenway Project (WGP – now WRWC) worked with the State of Rhode Island and the City of Providence to win designation for the Greenway as a Brownfield Showcase Community. When the program started, we were one of sixteen original Federally-designated communities selected to demonstrate how partnerships between Federal, State and local governments can expedite Brownfield reuse.

This designation helped secure funds from the Environmental Protection Agency for initial assessments and remediation at Riverside Mills (now Riverside Park and Lincoln Lace & Braid). The designation also spurred much more investment from federal, state, and local sources to continue restoration and improvements and has drawn national attention.

The WRWC has leveraged millions of dollars towards revitalizing these two sites, bringing environmental and economic opportunity back to the area.

The historical significance of the Woonasquatucket River cannot be accurately gauged by reference to its length or its flow. While it is not a big river, even by Rhode Island standards, it played a powerful role in Rhode Island’s progression from pioneer to national leader in the American Industrial Revolution.

At the turn of the 19th century, there was little to suggest that the Woonasquatucket River valley was on the brink of a revolutionary transformation. The river flowed through a rural landscape of forest and farmland from its headwaters all the way to the Great Salt Cove in Providence. The only indication of the changes to come was a scattering of small mills, where waterwheels turned by the river’s flow ground grain, sawed timber and powered other small industries for the local farm community.

These waterpower sites acquired a new significance after 1790, when Samuel Slater established the country’s first successful textile factory on the Blackstone River in Pawtucket. Local entrepreneurs inspired by Slater’s achievement were drawn to the Woonasquatucket, which had a narrow width and a swift descent that made it well suited for building the dams and water wheels to power the new factories. Daniel Lyman built the valley’s first textile mill in 1809; and, in an astounding burst of activity, aspiring manufacturers built five more cotton mills in 1812-1813. New mills continued to be built in the following decades until nearly every foot of the river’s drop was being used to turn a factory water wheel.

To keep their mill wheels turning, the manufacturers formed a company to build reservoirs upstream to store water for use during the dry months of summer, an experiment that was so successful that it was replicated on industrial rivers throughout the world. This innovation in water management was accompanied by many more technological advances made in Woonasquatucket textile mills, including the first power loom in Rhode Island (1817), and the factory mutual system of insurance, originated by Zachariah Allen at his Allendale mill (a fact reflected in the name of the present Allendale Insurance Company).

While waterpower began the industrial boom on the Woonasquatucket, it was steam power that fostered the densest concentration of industry in the valley, the stretch of river from the Providence Cove to Olneyville. By the end of the century, the river in Providence was lined by industrial giants such as: Brown and Sharpe, the country’s largest manufacturers of machine tools; Nicholson File, the country’s largest manufacturers of files; and nationally renowned manufacturers of woolens and worsted cloth, including the Atlantic DeLaine Mills, the Riverside Mills and the National and Providence Worsted Mills. Other mills produced a wide range of goods sold around the world, including printed cloth, looms and textile machinery, rubber goods, jewelry, steam engines and locomotives.

Although its prominence ebbed in the changing economic tides of the 20th century, the Woonasquatucket River valley retains the distinguishing features of its industrial heyday to a remarkable degree, from the placid ponds and early mill villages upstream, to the red brick complexes with towering chimneys that line its lower banks.